When I first got Merlin, as a young pup, I took him with me to Clicker Expo 2011, in Chicago.  He was a difficult dog even then.  I tried to take him to a lab, and he barked so much that we were asked to leave. He barked so much, that I ended up crating him in the hotel room with my friend Kama’s dog for most of the conference. Despite being reinforced heavily with attention, food, and being taken out, for all the barking, I think Merlin enjoyed his conference experience at Chicago Expo. He met lots of people and did lots of things.

Fast forward to Clicker Expo 2018, which I have been eagerly anticipating, as it is being held in my hometown, St. Louis.  I thought I might bring my old man dog, Nitro, for his last hurrah.  Then as his health faded, I decided I should try to work with Merlin enough that he’d be able to go with me.  Not long before Expo, I had to let Nitro go. I stepped up my work with Merlin, taking him to classes with my dear, patient, kind, friend, Tina, and working with him at home quite a lot. I kept good records, I felt we were making progress.

Then the French Bulldog puppy, Niko, happened. He was acquired in a rather convoluted way, for my adult son, Orion, who had always wanted a Frenchie.  But getting him to Arizona from St. Louis was a challenge, especially since I was leaving town to go to work for 10 days.  I decided a road trip was in order. So, on February 22nd, I left for work, returning on March 2nd, turning around and leaving again on March 3rd to drive to Arizona with two kids and a French Bulldog. We got to Arizona, did some vacation time and family time with my son/kids’ brother, then spent some time in New Mexico and Oklahoma, arriving home on the evening of the 15th.

Clicker Expo began on the evening of the 15th!  The morning of the 16th, I went to several sessions, then went home at lunch to get Merlin.  After lunch we had one teaching session, Sarah Owings’ On Source, Nosework class,  then the working lab.  Merlin was barking and problematic throughout the session, and toward the end we had to stand in the back, with him outside the door, and me inside, trying to learn the skills!  I was extremely frustrated, and really disliking him. I really do feel like we have tried so many approaches to deal with the barking, but it’s just who he is, and it does slow down considerably once he acclimates to a space, it just takes a visit or two. He was very overstimulated, and trying to hump and nip everyone who tried to pet him or talk to me.  When the lab began he was better.  He worked well, and was very focused, particularly considering the fact that I hadn’t even seen him, let alone worked with him, for 22 days.  Almost a month! He got tired and toward the end of the lab was a little crazy, obviously tired and overstimulated, so we left a few minutes early, to better manage him.  But I really appreciated Sarah Owings, and her patience with his barking, and I really feel like we did learn a lot and get a lot out of the lab.

Today was the second day of sessions and labs.  Jacob was kind enough to bring Merlin to the hotel just for the lab time, so Merlin arrived at 1:45 and stayed until 3:45.  The lab was Hannah Branigan’s Orient Express, which was excellent.  Merlin was more acclimated to the space, and he worked very well, with minimal barking.  He did get tired toward the end and lose focus on what we were doing, but overall, he did really well. I was proud of him today.  He may not be my dream dog, he may not be easy, but he’s the dog I have, and he’s trying hard, so I’m going to continue to try hard, and to not overface him with challenges he isn’t ready for, but to keep high expectations and train to whatever level we are able to achieve together.

Tomorrow morning, we have another learning lab at 9 in the morning, the topic is Animals in Control. We’ll be working on communication and giving the animals choices. I am hoping that Merlin chooses to say yes. 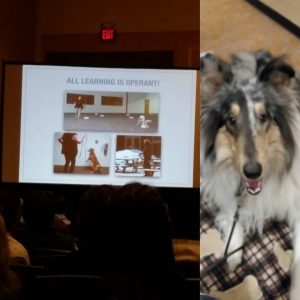